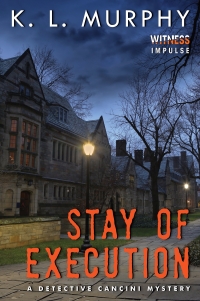 Detective Michael Cancini returns to the scene of an old case in the psychological suspense, STAY OF EXECUTION (Witness Impulse/HarperCollins).

Perfect for fans of “Making a Murderer,” a novel about a man exonerated of heinous crimes returning to a town that can’t let go of his bloody legacy

Little Springs was just a small college town, the kind of town where everyone knew everyone and violent crime was nonexistent—until a series of rapes and murders at the college.  After an outbreak of fear and hysteria, only the arrest and conviction of Leo Spradlin, the “CoEd Killer,” could end the terror.

Years later, Spradlin is suddenly cleared based on unshakable DNA evidence, and no one is more surprised than Detective Mike Cancini. As new questions surround the identity of the true “Co-Ed Killer,” Cancini struggles to accept his role in the conviction of an innocent man. Suspicions mount when Spradlin’s release coincides with a fresh wave of rapes and murders at the college, eerily reminiscent of the original crimes. Cancini is drawn back to Little Springs, caught in a race against time to uncover the identity of the latest “Co-Ed Killer” before the next girl dies…

Praise for STAY OF EXECUTION

“The plot will keep you turning pages, but it’s the colorful cast of characters that makes this story memorable. …I tore through this book from beginning to end…” Lisa Runge (The Kindle Book Review)

“Do put STAY OF EXECUTION on your to-read list.” Long and Short Reviews

“The second book in this series does not disappoint. The writing is fast-paced and suspenseful. You will want to binge read this one over a long weekend or vacation.” Ann H.

Rainy days and Mondays...the best time to write. Bonus: the watering is already done. #authorsofinstagram #writersofinstagram #mondaymotivation #rainyday #rainydaysandmondays #writer #wordcount #author #mondayvibes
Great weekend in spite of the weather! Love all these boys and thank you to all the parents who helped us to celebrate them all! 🎓🎓🎓🎉🎉🎉#graduation #graduationpictures #wolfepack #jmukappasig #jmugrad
May means the tomato plants are in the #earthboxes and I can’t wait for those first ripe tomatoes. Next up are the annual flowerpots. #mayflowers #tomatoes #earthboxgardening #may #sunshine #authorlife #writersofinstagram #authorsofinstagram #gardening #gardenlife
A stretch to qualify as TBT, but one week ago today, someone went to the beauty parlor and came out gorgeous! From scruffy to sleek.
Happy St. Patrick’s Day!💚🍀
Thrilled to be breaking into this customized notebook gifted to me by my children. I make notes about everything from my #wip to groceries to doctor’s instructions and use notebooks daily. My only problem is remembering which ones have which notes. 🙄😂