I recently published a post about some poor writing (my own – ugh!) and whether or not those badly written words amounted to some form of writer’s block. A fellow writer pointed out that since there were words on the page, it wasn’t really traditional writer’s block. She’s probably right but it was definitely some kind of mental meltdown The truth is, what I wrote on that particular day was nothing short of TERRIBLE. Either way, it was the response (number of views and links) to this post that surprised me most. Perhaps I’ve been living with my head buried in my keyboard but I truly hadn’t realized how many writers have experienced the dreaded block. And even more fascinating to me were the all-over-the-map methods to combat writer’s block. For example, who knew that you could try lying (??), cleaning up your work environment (this sounds like work to me), writing the end first, surfing the Internet (I thought everybody already did this), or playing Fruit Ninja (thanks, Emmie!). While I can’t vouch for any of these suggestions, I can point you in the direction of a few interesting posts on the subject:

Since my own writing breakdown, I’ve deleted the bad pages, stepped away, and started again. I like the new chapter better although it’s still not where I want it to be (that usually takes a few edits for me). In addition to working on some new chapters, I’ve been preoccupied with another freelance assignment that’s due next week, and most importantly, waiting on the edits for my novel, A GUILTY MIND. My editor has had the book for just over two weeks and I’m expecting her opinions and comments soon. Can you feel my anxiety? Of course, I self-edited many times before I sent her the manuscript (see my post Your Manuscript and The Home Edit). I am confident the manuscript is in decent shape. Still, what if she cuts it to bits? I want the truth, of course, but what if the truth isn’t quite what I’m expecting? Fortunately, I’m too busy to dwell on it too much…for now.

One final note, a kind fellow writer and blogger nominated me for the Lucky 7 award. Thank you again, Ben (www.storymultiverse.com). In my mind, this is primarily an award allowing writers to showcase a little of their work and pass it along to other aspiring novelists. The manuscript (or poetry or short stories or anything else) can be complete or a work-in-progress. 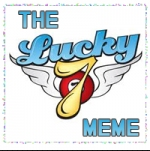 When tapped, the writer does the following:

Here is my excerpt from A GUILTY MIND:

“I don’t know,” he told the young woman, “I haven’t thought about that yet.”

“Well, I have.” Sarah stood, brushing the dirt from her shorts, slipping on a pair of flip-flops. “I’m going home now,” she sighed. “I’ve got some more thinking to do.”

“Can I call?” he asked, afraid to push, afraid not to.

“No, I don’t think so.” Hanging his head, he felt the energy seep from him, his arms slipping to his sides. Eyes stinging, he thought it might be over, that she might have already made up her mind. “George,” she spoke, standing over him, “whatever happens, whatever I decide, I do love you. Not the man you think you’re expected to be, but the man I saw, the man I knew these last few months.” Leaning over, she kissed the top of his head, her soft lips momentarily brushing the skin. “I’ll call you soon. I promise.”

Just as he had then, he reached up, his fingers feeling for the memory of her kiss. But the past fell away and instead, he felt only the lines that had deepened across his forehead. Sighing, his head fell back against the sofa cushions, his nightcap balanced in his lap. Who was the man she knew? Where was he now? When had he lost himself? Was it right after the accident? Right after she was gone? Or was it years of marriage to a woman he didn’t love? Closing his eyes, he wished for Dr. Michael. At least with the therapist, he’d been honest, most of the time anyway.

But now, with Dr. Michael dead, apparently murdered, his wife was bringing in a lawyer, protecting George from himself. Was Mary Helen right? Did he need Larry? Rubbing his temples, the pounding refused to go away, hammering at his skull. Leaning back, he rolled the cool glass across his head. Without Dr. Michael, he was back where he started, on his own. He could find a new therapist, of course, but in his heart, he knew the problems would not go away until he grew a backbone. He opened his eyes. The past, the nightmare that haunted him day in and day out, was his and Mary Helen’s and Sarah’s. No amount of therapy could erase what had already been done. Yet the future, that was another matter. If he followed the advice of Dr. Michael, the future was not lost.

Sitting up straighter, he blinked his eyes in the darkness. Dr. Michael. What had happened to him and who would want to kill him? He shook his head, frustrated. He couldn’t even remember the events of his own night. Had he blacked out again? Dr. Michael had repeatedly expressed concern about the drinking, the blackouts, all of it. But George didn’t want to hear. Cursing the headache, he went over the day again; trying to remember. First was the business lunch, then the appointment with Dr. Michael, the outburst during the session, and finally, the bottle of scotch at the club. And that was it. After driving away from the club, swerving across the parking lot, he just couldn’t remember. Not driving home to his apartment. Not tossing his clothes across the floor. Not falling naked into the sheets. No matter how hard he tried, his memory was blank. There in the darkness, he again heard the accusation in his wife’s words. “What have you done?”

Here are my award-winning writers (I do apologize if you’ve already won and I didn’t know about it!):

Congratulations again to all! If you have more to say on writer’s block, be sure to send me your comments and/or links!!

1 thought on “Writer’s Block and the Lucky 7”

Happy 22nd to Luke, who always lives life to the fullest. May your days always be sunny ☀️ and filled with love. xxoo 😘😘🎉🎉 #murphybirthweek
Happy 25 (!!!!!!) to our amazing Cameron aka eeya eeya, the machine, world traveler, editor, big sister, daughter, and friend. We love you so much ❤️❤️❤️ xxoo Already can’t wait to visit you in NYC!
Looking forward to being in New Orleans to talk about pushing the boundaries of (women’s) crime fiction with this awesome group @gale.massey @debbiebabitt @luvthrillers @katewhite_author & @sarahzettelauthor. #bouchercon2021 #authorsofinstagram #womenscrimefiction #writersofinstagram #authorcommunity #neworleans #mysterywritersofinstagram #thrillers #crimefiction #detectivefiction #suspensewriters
Thank you to @visitsuffolkva and Katie Kelley for this great surprise. It was so fun to be a part of this mystery festival and the “Detective” panel with so many great writers. Can’t wait for 2022! #writersofinstagram #authorsofinstagram #mysterywritersofinstagram #mysteryreaders #suffolk #mysterywriters #suspense #detectivefiction #crimefiction #cancinimysteries
Palm trees, sun, and sand (and even alligators) are good for the soul. ☀️☀️Loving having a few days in #hiltonhead. Also, tackling my #TBR pile, knocking out The Silent Patient @alex.michaelides and The Midnight Library @mattzhaig (loved both) and now reading The Girls in the Stilt House by @kellymustianauthor. With summer coming, I’m looking to add to my wishlist and taking recommendations. Let me know! #summervibes #summerreading #beachlife #beachtime #beachday #hiltonheadisland #southcarolina #southcarolinabeaches #rmc #shipyardhiltonhead #shipyardhhi
These two!❤️❤️happy National Rescue Dog Day and so grateful to the wonderful groups that made it possible for us to adopt these amazing dogs. #nationalrescuedogday #dogsofinstagram #dogsofinsta #zaggingwithziggy #ziggyandmacy #rescuedogsofinstagram #dogfamily #dogs #dogstagram #dogslife

All text at kellielarsenmurphy.com is reserved 2012